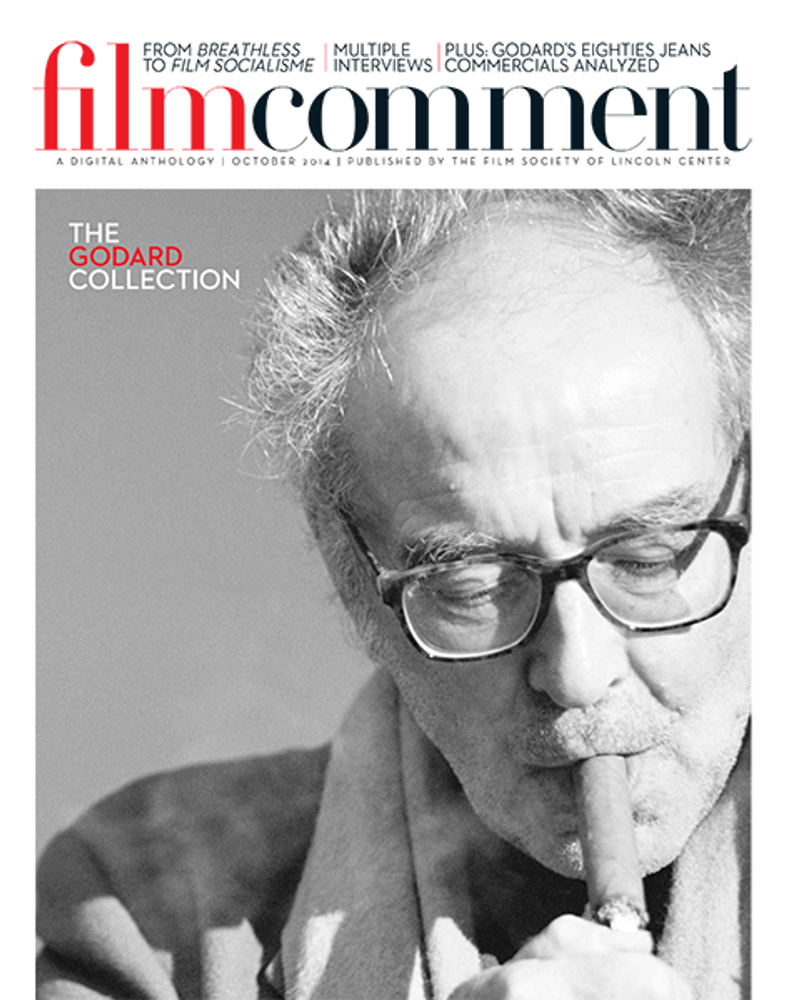 Collecting everything FILM COMMENT magazine has published about Jean-Luc Godard since 1962, this 100-plus-page anthology includes pieces by Robin Wood, Jonathan Rosenbaum, Gilbert Adair, Raymond Durgnat, Amy Taubin, Kent Jones, and many more. In addition to analyses of his films, soundtracks, commercials, and installations, it also features multiple extensive interviews with the auteur himself.

Fall 1971: Wind From the East by Joan Mellen

May/June 1981: Six Times Two/On and Under Communication and France/Tour/Detour/Two/Children by Gilbert Adair

May/June 1988: on the omnibus opera film, Aria by Michael Walsh

March/April 1995: after declining to accept a Special Award from the New York Film Critics Circle, Godard provides a short-list of grievances against the film industry

March/April 1996: an extensive interview with Godard by Gavin Smith

September/October 1998: interview with Godard on his Nineties works and concerns by Jonathan Rosenbaum

September/October 2000: on the audio track release of Histoire(s) du cinéma by Kent Jones

November/December 2001: on the cacophony of images and sounds in Godard’s In Praise of Love by Chris Norris

January/February 2002: review of In Praise of Love by Amy Taubin

From January/February 2002: In Praise of Love-era interview with Godard by Jean-Yves Gaillac, Tissy Morgue, and Jean-Philippe Guerand

January/February 2002: analysis of Godard as visual stylist and philosopher by Kent Jones

July/August 2002: Godard’s return to the freeze-frame and theories on montage by Serge Daney

January/February 2005: on the art of reading Godard analytically by Richard Combs and Raymond Durgnat

January/February 2005: a behind-the-scenes portrait of Godard on the set of Notre musique by Frédéric Bonnaud

July/August 2006: on Godard’s installation for the Pompidou Center by Amy Taubin

May/June 2010: tracing Breathless back to its origins by Geoffrey O’Brien