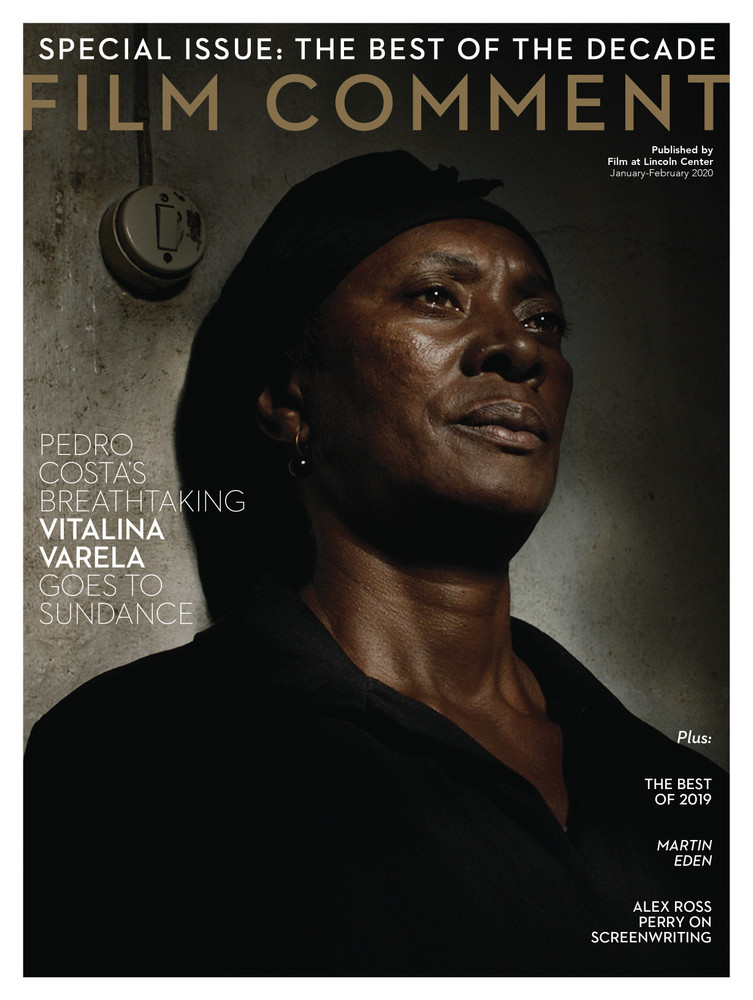 Special sections on the best of the decade and the best of 2019, with essays from Dennis Lim, Amy Taubin, and Devika Girish, and lists galore, from the best 50 films of the 2010s to critics Personal Bests and Editors’ Picks to the Best Films of 2019, with arguments for each by the magazine’s contributors. Plus, an extensive interview with Pedro Costa on his breathtaking Vitalina Varela, Phoebe Chen on Pietro Marcello’s breakthrough Martin Eden, Steven Mears on the best single-scene performances, interviews with Albert Serra and Angela Shanelec, and much, much more.

The Decade in Review
Another 10 years come and gone—it’s time to do what critics do best: assess, reassess, catalog, rinse, repeat!

Best of the Year

Pedro Costa
By Jordan Cronk
For years, the Portuguese director has been returning to the shantytown of Fontainhas, outside of Lisbon. Now, focusing intently on the extraordinary actress/character Vitalina Varela, Costa has made his most beautiful, haunting film yet

One-Scene Wonders
By Steven Mears
It only takes a moment: actors who make a huge impression in a very short period of time have created some of the best (pocket-sized) performances in recent years—masterpieces in miniature

THE PRE-SHOW | News, views, conversations, and other things to get worked up about
News, Inspired: Angela Schanelec on I Was at Home, But..., Release Me: Burak Çevik’s Belonging by Lawrence Garcia, Directions: Albert Serra by Manu Yáñez Murillo, Restoration Row: Samy Szlingerbaum’s Brussels Transit by Max Nelson

MAKE IT REAL | The wide, wide world of cinematic nonfiction
Eric Hynes on three unreleased documentaries that rank among the best of the year

OFF THE PAGE | The art of getting from book to screen
H.G. Wells and David Lean’s The Passionate Friends (1949) by Imogen Sara Smith

THE BIG SCREEN | Reviews of notable new films opening in theaters (hopefully near you)
The Traitor by Molly Haskell, Beanpole by Lauren Kaminsky, 1917 by Nick Pinkerton, The Assistant by Devika Girish

Short Takes: And Then We Danced by Nick Davis, Young Ahmed by Farihah Zaman, Bombshell by Sheila O’Malley, Invisible Life by Beatrice Loayza, and Les Misérables by A.G. Sims

GRAPHIC DETAIL | The art of the movie poster
The best repertory posters of the decade, by Adrian Curry

A digital copy of this issue is available by subscribing to the Film Comment app. Or get a Film Comment print subscription, which includes free access to the app.